Mixing Caribbean or Latin culture based food with traditional American Thanksgiving fare can really spice up dinner conversation.  Last year I experienced a delicious chorizo stuffing for a Thanksgiving dinner at my home.  It was an experiment which fortunately went well.  However when a food or spice is prominently used in your culture it isn’t a foreign concept to create a fusion of one knows and loves from their culture.  In the article below read how this Latin American family puts a twist on the American Thanksgiving holiday.- Crystal Johnson MCCN Editor & President

Heritage recipes from local Latin American kitchens infuse traditional Turkey Day dinners with a new culinary spirit. Related Links:Latin Thanksgiving recipes The influence of Latino cooking is everywhere in America, from fast food and casual-dining restaurants to upscale gourmet dining rooms in hotels and haute big-city gourmet restaurants. Many of these Latino culinary trends have become deliciously entwined with traditional Thanksgiving Day dinners, as treasured heritage recipes from Mexico, Brazil, Cuba, Puerto Rico, Peru and other Latin countries make it to the Turkey Day menu in homes all over this nation. When Dr. Baltasar “Cucho” Jimenez and his wife, Melba, are in their glamorous stone kitchen he designed, cooking together for Thanksgiving they speak only Spanish. “It’s a language of passion,” observed Melba, “and for us, cooking together is a passion.” But not a profession, as he is a dentist and she is a real estate broker. Both were born in Puerto Rico, at opposite ends of the island, and they met in college. They married in Puerto Rico and later moved to Gainesville, where Cucho earned his dental degree at the University of Florida. They settled in Sarasota in 1986, and Melba managed his office until seven years ago when she transitioned into selling up-market homes. Their Thanksgiving Day mixes heritage recipes and Latin customs with a typical American menu and some contemporary American traditions. Cucho has a 62-inch flat-screen TV in the kitchen so he can catch game scores while he makes his signature turkey stuffing that includes sausage, almonds, raisins and olives. Melba makes her popular pumpkin flan, and their son Sebastian, 16, is in charge of dessert, homemade ice cream.

Read more about their family dinner at: http://www.heraldtribune.com/article/20081119/ARTICLE/811180248?Title=A-Latin-Thanksgiving 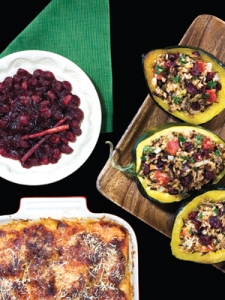