It is quite convenient for the Multi Cultural Cooking Network that the New Orléans Saints will be in the Big Super Bowl dance versus the Indianapolis Colts.  Why? New Orléans is legendary for food so it makes our jobs easier.  The list of foods of New Orléans are as long as the Menu items at Bubba Gump. – Crystal A. Johnson, MCCN Editor

The Cajun and Creole foods of the city and south Louisiana are living examples of people adapting to their new surroundings and neighbors. Creoles are descendants of wealthy Europeans sent to establish New Orleans. Their taste tended to be richer with sauces and roux from the French, sausages from the Germans, spices and rice from the Spanish, and desserts and pastries from the Italians. These European descendants often intermarried or employed Africans from the West Indies or Africa who contributed spices, slow cooking methods, beans and rice, and the use of the tomato. Africans brought with them a vegetable used to thicken and flavor soups. We call this vegetable “okra,” but the Africans called it “gumbo,” giving the famous soup its thickness and name. Native Americans introduced the settlers to local vegetables and spices, including sassafras for file and bay leaf.  Read More:  The Food of New Orleans 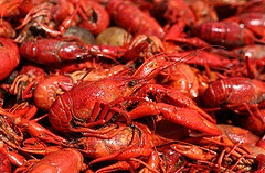