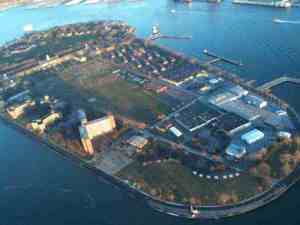 I recently got to attend the New York Vendy Awards on Governor’s Island.  When you are looking for wonderful free things to do in New York, taking the ferry over to Governor’s Island allows you clear view of the Statue of Liberty and chance to visit an island rich with history.- Crystal J, MCCN Editor

First named by the Dutch explorer Adriaen Block, it was called Noten Eylant (and later in pidgin language Nutten Island) from 1611 to 1784. The island’s current name—made official eight years after the 1776 Declaration of Independence—stems from British colonial times when the colonial assembly reserved the island for the exclusive use of New York’s royal governors.

Defensive works were raised on the island in 1776 by Continental Army troops during the American Revolutionary War, and fired upon British ships before falling into enemy hands. From 1783 to 1966, the island was a United States Army post. From 1966 to 1996 the island served as a major United States Coast Guard installation. In 2001, the two historical fortifications and their surroundings became a National Monument. On January 31, 2003, control of most of the island was transferred to the State of New York for a symbolic $1, but 13% of the island (22 acres or 9 ha) was transferred to the United States Department of the Interior as the Governors Island National Monument, administered by the National Park Service. The national monument area is in the early stages of development and open only on a seasonal basis, so services and facilities are limited.