I grew up in what I consider the greatest city in the world…New York City. There is nothing like celebrating the holidays in New York.  Before the Christmas tree lighting at Rockefeller Center or the extravagant holiday widow displays at retail stores, the Macy’s Day Parade kicks everything off.

I lived my entire life in New York and never went to the parade.  In asking my parents why they never took my sister and I my mother’s response was, “ I always wanted to take you and your sister, but by the time I turned around you all had grown up.”  As a child I was content in just sitting in front of the television, in my pajamas (in the warmth) watching the different floats go by; Woody Woodpecker, Snoopy, Smurfette (I just showed my age with that last one), and listening to the latest celebrity at the moment perform their latest song.  But as I got older and moved to another state my desire to one day be part of the throngs of people standing in the cold watching a large balloon go by became a dream of mine. Thanksgiving of 2008 my dream came to pass.

I traveled back to New York with my road partner Monica, and after a hearty breakfast at my parent’s house we braved the cold, destination The Macy’s Day Parade.  As we exited the subway and headed to the surface it is needless to say moving around wasn’t the easiest, but we were on a mission to find the best spot, stay warm, and act like a kid when our favorite balloons came by. 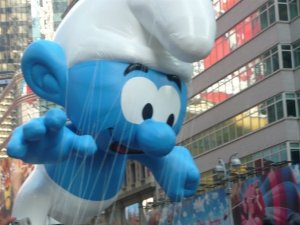 As the balloons started to make their way down the street I think I enjoyed the looks of the children’s faces as they watched their favorite characters careen over their heads “ooh Dora, ooh Clifford.”  Although I enjoyed the children I was looking for my favorites, Kermit the frog and Snoopy.  I don’t know why, they just are.  As the last band played their note and the last float, well floated by, there was just one more thing I had to see, you guessed it, Santa Claus.  Old Saint Nick makes it official that Christmas is quickly approaching.

As we fought our way through the massive amount of people to make our way back to the subway I felt very satisfied, that is one more thing I can cross of my list. My next adventure the lighting of the Christmas tree at Rockefeller center. 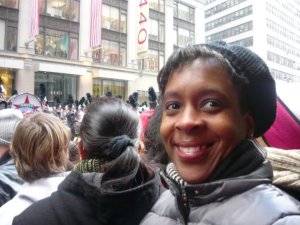