﻿Many people throughout India celebrate the nation’s Republic Day, which is a gazetted holiday on January 26 each year. It is a day to remember when India’s constitution came into force on January 26, 1950, completing the country’s transition toward becoming an independent republic.

What do people do?

Much effort is put towards organizing events and celebrations that occur on Republic Day in India. Large military parades are held in New Delhi and the state capitals. Representatives of the Indian Army, Navy and Air Force and traditional dance troupes take part in the parades.

A grand parade is held in New Delhi and the event starts with India’s prime minister laying a wreath at the Amar Jawan Jyoti at India Gate, to remember soldiers who sacrificed their lives for their country. India’s president takes the military salute during the parade in New Delhi while state governors take the military salutes in state capitals. A foreign head of state is the president’s chief guest on Republic Day.READ MORE 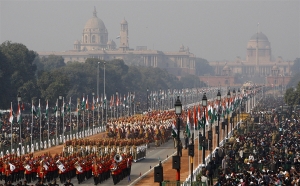