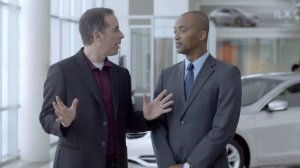 Super Bowl ad parade — but according to a tipster to TMZ, the company that cast the ad sought a black actor for the role of a dealer by specifying someone “not too dark.” Moments ago, Acura issued an apology, saying it was unaware of the restriction.

TMZ says the call sheet for the ad was provided by another actor who was passed over for the role and angered by the casting company’s description. In the sheet, the firm says the role of a dealer who tells Seinfeld the first Acura NSX has already been sold should be “nice looking, friendly. Not too dark.”

The ad was created by an ad firm called “rp&,” a division of the RPA firm that creates ads for Acura’s parent Honda. (One might suggest updating their news page, which currently features several angry tweets about the racial choices of its Acura ad).

The real question: Why would the commercial specify a race for any of its minor characters? READ MORE