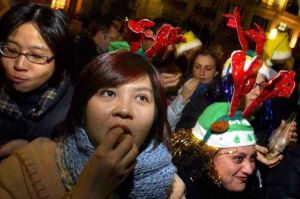 We all know about the Times Square ball drop on New Year’s Eve, so here is a look at New Year’s traditions from around the world:

SPAIN At the stroke of midnight, many Spaniards ring in the new year by eating 12 grapes, one at each chime of the clock. Each grape signifies good luck for one month in the coming year, and everyone tries to finish their grapes by the 12th chime. The tradition, which became widespread in 1909, is capped with a toast of sparkling wine or cider.

SCOTLAND The Scottish New Year’s tradition of “first-footing” is a custom in which a person crosses the threshold of a home after midnight, carrying a gift for good luck in the coming year. However, the first-footer must not be inside when the clock strikes midnight – simply stepping out right before midnight and stepping back in doesn’t count.

DENMARK Many people in Denmark ring in the new year by jumping off chairs in unison at midnight. The jump is said to rid a person of whatever negative spirits he’s carrying and usher in a brand new year of good luck.