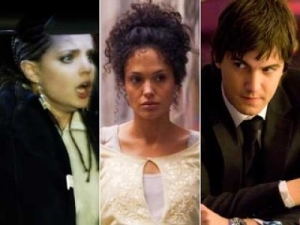 As former casting director and a person of color, the subject of casting is matter of marketing not being accurate, at least not when the character is a person of color.   I once worked on a popular reality television program where secretly said we are looking for a white family.  We let Asian, Latino, and African Americans walk through the door, fill out applications and videotaped interviews knowing they would never be the selected family.  From big screen to small screen, casting people of color continues to be an issue.  People already get upset which someone of another culture plays someone in their culture or in the Black community when someone lighter or darker plays the part of famous person.  Currently this is happening with Zoe Saldana, an afro latina playing the famous dark jazz singer Nina Simone.  It happened with Denzel Washington playing Malcom X, Jennifer Lopez(Puerto Rican) playing Selena(Mexican American).  Even the heroine Katniss of Hunger Games is described as olive skinned and fan imagined she may be biracial, latina or Native American.    Esai Morales(Puerto Rican) plays a Mexican American in La Bamba.

Ironically Esai Morales who has played roles of Mexican characters time after time, posted on his facebook page an article about Hollywood’s Whitewash of characters.  He prefaced the article by saying, “Whitewashing has hurt my career options in ways that I can’t even begin to calculate.”

Even if you’ve never heard of Hollywood whitewashing, chances are you’ve seen it anyway. It’s a kind of casting where film studios have placed white actors in lead roles under the assumption that the majority of Americans would rather see a white face than a non-white one—despite what the role calls for. And while Hollywood may not resort to putting actors in blackface anymore, the practice of just bending the race of a character is not an uncommon one. Hence, Jake Gyllenhaal playing a Persian.

Read the More of the artice, 25 Minority Character That Hollywood Whitewashed 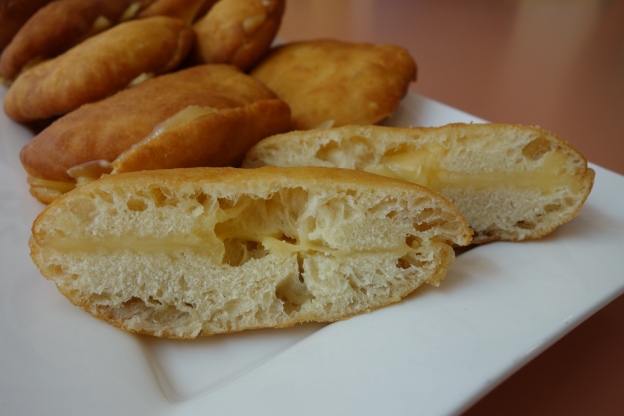 Johnnycake (also jonnycake, johnny cake, journey cake, shawnee cake and johnny bread) is a cornmeal flatbread that was an early American staple food and is prepared on the Atlantic coast from Newfoundland to Jamaica. The food probably originates from the native inhabitants of North America. It is still eaten in the West Indies, Dominican Republic, Bahamas, Colombia, and Bermuda as well as in the United States.

Johnnycakes are a type of unleavened cornbread made of cornmeal, salt, and water. The dough was set on a wooden board or barrel stave and placed at an angle in front of an open fire to bake.Hoecake was traditionally cooked on a hoe: “Hoe-Cake: A cake of Indian meal, baked before the fire. In the interior parts of the country, where kitchen utensils do not abound, they are baked on a hoe; hence the name.”
In the American south during the 18th century versions were made with rice or hominy flour and perhaps cassava.[19] A 1905 cookbook includes a recipe for “Alabama Johnny Cake” made with rice and ‘meal’.

Watch the Simple Johnny Cake Recipe.  In a rush?  Click for written directions

Pumpernickel has been long associated with the Westphalia region of Germany, first referred to in print in 1450. Although it is not known whether this and other early references refer to precisely the bread that came to be known as Pumpernickel, Westphalian pumpernickel is distinguished by use of coarse rye flour—rye meal and a very long baking period, which gives the bread its characteristic dark color. Like most traditional all-rye breads, pumpernickel is traditionally made with an acidic sourdough starter, which preserves dough structure by counteracting highly active rye amylases. That method is sometimes augmented or replaced in commercial baking by adding citric acid or lactic acid along with commercial yeast.[1]

Traditional German Pumpernickel contains no coloring agents, instead relying on the Maillard reaction to produce its characteristic deep brown color, sweet, dark chocolate, coffee flavor, and earthy aroma. To achieve this, loaves are baked in long narrow lidded pans 16 to 24 hours in a low temperature (about 250°F or 120°C), steam-filled oven. Like the French pain de mie, Westphalian pumpernickel has little or no crust. It is very similar to rye Vollkornbrot, a dense rye bread with large amounts of whole grains added.

While true Pumpernickel is produced primarily in Germany, versions are popular in the Netherlands, under the name Roggebrood, where it has been a common part of the diet for centuries. 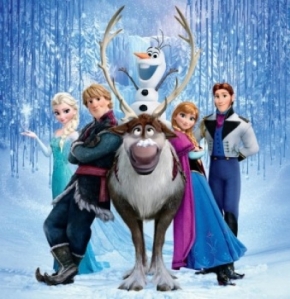 You can’t leave the movie theater without thinking this one is an instant classic.  It is the story of two sisters, princesses of course.  One has magical capabilities but lives with this gift as if it were a curse.  In trying to protect her younger sister, they become estranged yet the little sister does not know why.  Yes, there is some boy meets girl in the story too.

The music is just waiting to be made a Broadway production.  And it is easy to think Broadway with the dazzling vocal ability of Idina Menzel brings the character Elsa to life especially when she sings, Let it Go.  Buy the dvd, buy the soundtrack and get to know the new Disney characters.    The Frozen is sure to melt some part of your heart.

The Food:  The characters desire chocolate but have fun with your kids with this one.  Make some snow cream from the first snow or frozen hot chocolate.   If you are adult crowd enjoying this flick then pour a glass of ice wine and enjoy.

Rating: Sunny Side Up 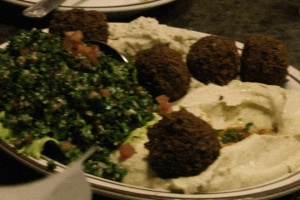 It was Tuesday night and the restaurant called Carnivale located in a strip mall was packed at 7PM.  On this night, I dined with six other people upon recommendation of one the persons from our party.  With a large group, we were able to  come to a general consensus of sentiment regarding the restaurant.  We  were all pleased with appetizers, the main courses were generally lackluster and the desserts deserved a round of applause.  Of the three desserts ordered, everyone was raving over the baklava.

Two  women from our party of diners expressed that the food was simply okay and they had no desire to come back.  What went wrong?  For many of us the meat whether chicken, lamb or beef seemed to by dry.  For Middle Eastern, no one found the meat to be particular marinated well which often some of appeal of this type of food.  Ultimately, my fellow diners didn’t think the food was seasoned well.

We did enjoy, the hummus, warm pita and falafel.  Actually, my sharwarma with pita, lamb and beef was something I didn’t touch the next day.  The meat was dry but the flavor of the meat was good. 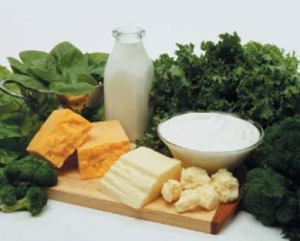 Did you know that by age 12, only 10% of children are getting enough calcium for proper growth and bone development? Calcium deficiency is becoming a national problem – according to a recent study, 90% of women, 70% of men and 60% of teens don’t consume the recommended daily allowance of calcium.

Most people know that milk is a good source of calcium. Much of the advertising for dairy products uses phrases such as, “Calcium for Strong Bones!” and “Prevent Osteoporosis!”. However, how much do you really know about calcium? Is milk really the best source of calcium, or are there better calcium-rich foods? How much calcium do you need to incorporate into your diet? Here’s a quick overview of calcium that will help you understand the true importance of calcium in your body.READ MORE 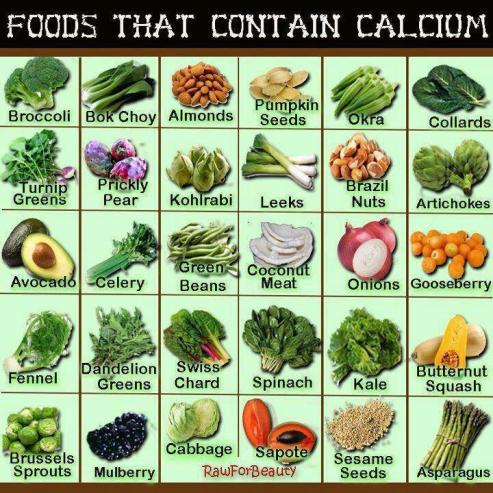 Yes that’s right I said it…Cow Foot Soup.  While most Belizeans reading this will probably start salivating when thinking about this and even more when they see the pictures, others from outside countries might go “EEEwwwwww”.  It doesn’t sound delicious or appetizing but once you’ve tried it you will most definately change your mind, or you might not, but like the name of this blog says “No knock it til you try it”. 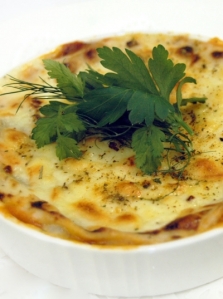 Here is an interesting twist on lasagna! If you can find kangaroo minced meat, this recipe will wow your guests. One thing to keep in mind,  kangaroo meat is regarded a very lean meat, if overcooked it can easily dry out and become tough to eat. To prevent this make sure you marinate before cooking, only cook to medium rare and when serving make sure you cut against the grain for maximum tenderness.

See Metric to US Conversion Table

In a large saucepan on medium heat, cook the kangaroo mince, onion, and garlic until brown. Then stir in tomato paste and wine then cook until reduced. Add bush tomato chutney and wildfire spice, and then allow to simmer for at least 25 minutes, stirring occasionally. Season with salt as required.

When making the béchamel sauce, as it cools whisk in the lemon myrtle, this will ensure maximum flavour.

Bake at 180 degrees celsius for 35 to 45 minutes or until golden on top. Sprinkle wildfire spice on the top and allow to stand for 10 minutes before serving. Garnish with fresh herbs.

Citizen Report from Nataki H-If you are someone who enjoys meat but is interested in the Vegetarian diet every now and again, try Quantum Leap 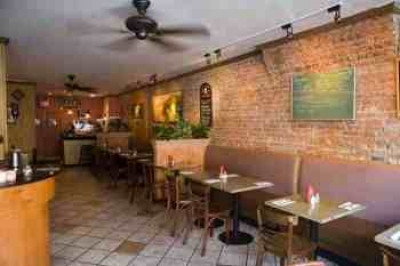 located at 203 First Ave., New York, NY 10003 near 12th St. I was convinced to try out this spot by a group of my vegetarian friends and to my surprise, I not only enjoyed it, I willingly went back a few more times. We started out with the Blue Corn Nachos which were to die for. If you think Nachos with a meat substitute sounds unpleasant, you have to try these. We shared those down to the last tortilla crumb. Fortunately if you are a seafood lover, they have several items on the menu that are must-haves such as Malaysian Spiced Red Snapper. If you are visiting NYC, it’s worth it to be adventurous and go over to the Eastside for some flavorful Vegetarian and Seafood dishes that will leave you feeling satisfied and feeling good about what you ate. The atmosphere aint bad either!

The Wolf of Wall Street is an in your face outrageous looney and often times vulgar ride.  It the telling of the real life story of Jordan Belfort.  In the 1990s, he founded the brokerage firm Stratton Oakmont which functioned as a boiler room marketing penny stocks, where he defrauded investors with fraudulent stock sales   All I could think is this is going to be a DVD collectors classic in the likes of Donnie Brasco instead you are watching “corporate gangsters.”  Leonardo DiCaprio is utterly amazing as crooked New York stockbroker Jordan Belfort.  His physical comedy is hilarious.  Matthew McConaughey role is brief but freakishly entertaining.  Jonah Hill is also provides an impressive performance.    The characters are great and the story keeps you guessing, “What is going to happen next?”

The Food:  Guys, if you catch this in movie theaters then a more upscale restaurant may be in order.    If this winds up being a movie night at home.  Then have some fun with champagne and caviar.

*Advisory:  Not for children, nudity, cursing, and sex

Ranking:  Sunny Side Up