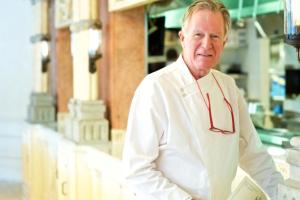 Legendary California chef Jeremiah Tower has taken over the kitchen at Tavern on the Green, which wants to be more than a place you take your grandma.

He’s no rookie; the Jeremiah Tower who now mans the stoves at the Upper West Side tourist Mecca is the same legend who helped pioneer “California cuisine” with his San Francisco foodie temple, Stars, in 1984.

Tower replaces Katy Sparks, who was brought in by owners Jim Caiola and David Salama after their $16 million renovation of the fabled Tavern last year.

But Sparks bolted — or was asked to leave — after reviews so scathing that they could singe eyebrows.

On the face of it, hiring Tower is risky, even nutty. He was once one of the biggest names in American cuisine — but that was back when Ronald Reagan was president.

Since then, Tower has been a consultant and a cookbook writer — a vocational path typically followed by burnouts or dropouts. Read More.