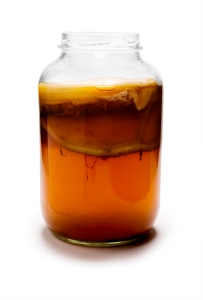 Kombucha, including the culture of bacteria and yeast

referring to the culture; botanical name Medusomyces gisevii Lindau is a fermented, slightly alcoholic, lightly effervescent, sweetened blackor green tea drink commonly intended as a functional beverage for its supposed health benefits. Sometimes the beverage is called kombucha tea to distinguish the name from the kombucha culture of bacteria and yeast.

he exact origins of kombucha as a drink are not known.[7] It is thought to have originated in the area of Northeastern China, and was traditionally consumed there, but also in Russia and eastern Europe