The mission of the Los Angeles Korean Festival is not only to provide an opportunity for the young Korean-American second generation to appreciate their culture and heritage, but also to serve as an instrument for which people from all ethnic groups can learn and experience Korean culture.  The festival is annually held in the fall for four days.  SEE  MORE PHOTOS ON FACEBOOK

Table manners play an important part in making a favorable impression. They are visible signals of the state of our manners and therefore are essential to professional success. The point of etiquette rules is to make you feel comfortable – not uncomfortable.

Use the silverware farthest from your plate first.

Here’s the Silverware and dinnerware rule:  Eat to your left, drink to your right. Any food dish to the left is yours, and any glass to the right is yours.

Starting with the knife, fork, or spoon that is farthest from your plate, work your way in, using one utensil for each course. The salad fork is on your outermost left, followed by your dinner fork. Your soup spoon is on your outermost right, followed by your beverage spoon, salad knife and dinner knife. Your dessert spoon and fork are above your plate or brought out with dessert. If you remember the rule to work from the outside in, you’ll be fine.(READ MORE For American & Continental/European Style)

Rice, soup, a spoon and chopsticks are arranged from left to right, in that order for each person. Stews and side dishes are placed in the center to be shared by all. 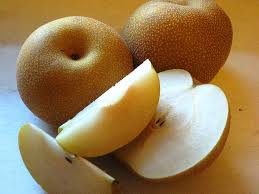 Sunni Boswell of the Asian Express, teaches middle school children in the segment below about Asian Fruits.  This lesson provokes children to identify different Asian countries which helps the children to recognize the diversity of Asian cultures.

Recently, Kimora Lee Simmons & Djimon Hounsou have graced the cover of Ebony magazine with their newborn baby.  With the mommy of three in the spotlight, MCCN thought it fitting to do what we do best by investigating must have foods of the fashion princess.  Among Kimora’s favorite eatery stomping grounds according to the Los Angeles Times, fresh-squeezed cherry lemonades at Hot Dog on a Stick by the Santa Monica Pier, Nanbankan in West L.A. for some traditional Japanese barbecue. Try the shiso chicken and the grilled okra.  MCCN did some digging about more of her food loves. We found an episode of Simmons show when the Fab One once made her friend Chris pull over at All American Burger.  She says, ” When there is a cheeseburger around, I just can’t help myself.”  When Simmons would have a taste for New York she would go to the City Bakery in the Brentwood Country Mart to feast on their sinful caramel French toast; however, that City Bakery is now closed.  MCCN may have to check out these places because the food sounds scrumptious.

She has been in the limelight for years but maybe you have been not quite sure about her ethnic background. Ethniccelebs.com reports that Fashion designer and the ex-wife of record producer, Russell Simmons was born to an African–American Father and a half Japanese and Korean Mother who was raised in Korea. There is some debate regarding her Mother’s ancestry. Some say she is half Korean while others say she is full Japanese.

Sake or saké (pronounced /ˈsɑːkiː/ or /ˈsɑːkeɪ/ in English and [sake]  in Japanese) is a Japanese alcoholic beverage made from rice.

This beverage is called sake in English, but in Japanese, sake (酒) or o-sake (お酒) refers to alcoholic drinks in general. The Japanese term for this specific beverage is Nihonshu (日本酒), meaning “Japanese sake”.

The origins of sake are unclear; however, the earliest written reference to use of alcohol in Japan is recorded in the Book of Wei, of the Records of Three Kingdoms. This 3rd century Chinese text speaks of the Japanese drinking and dancing. Sake is also mentioned several times in the Kojiki, Japan’s first written history, compiled in 712. People used sake for spiritual functions because people who had it got a fever.

The first alcoholic drink in Japan may have been kuchikami no sake (“mouth-chewed sake”), which is made by chewing nuts or grains and spitting them into a pot. The enzymes from the saliva allow the starches to saccharify (convert to sugar), and then ferment. This method was also used by Native Americans (see cauim, chicha and pulque), and inscriptions from the 14th century BC mention Chinese millet wine (小米酒,xiǎo mǐ jǐu) being made the same way.Though there are various opinions in the start of sake, ancient sake was a basically sticky state of the paste as “neri sake” that remained in Izumo and Hakata now.

Regardless, by the Asuka period, true sake – made from rice, water, and kōji mold (麹, Aspergillus oryzae) – was the dominant alcohol. In the Heian period, sake began to be used for religious ceremony and people seldom drank it. Sake production was a government monopoly for a long time, but in the 10th century, temples and shrines began to brew sake, and they became the main centers of production for the next 500 years. The Tamon-in Diary, written by abbots of Tamon-in temple from 1478 to 1618, records many details of brewing in the temple. The diary shows that pasteurization and the process of adding ingredients to the main fermentation mash in three stages were established practices by this time. In the 16th century, technique of distillation was introduced into the Kyushu district from Ryukyu, and started brewing shochu called “Imo – sake,” sold at the central market in Kyoto. And, powerful daimyos imported various liquors and wine from Europe, China, and Korea.

In October 2003, the People’s Republic of China commenced their first manned space flight. The astronaut, Yang Liwei, brought along with him and ate specially processed yuxiang pork (鱼香肉丝), Kung Pao chicken (宫保鸡丁), and Babao rice (simp: 八宝饭; trad: 八寶飯), along with Chinese herbal tea. Food made for this flight and the subsequent manned flight in 2007 has been commercialized for sale to the mass market.

In April 2008, South Korea’s first astronaut, Yi So-yeon, was a crew member on the International Space Station and brought a special version of Korea’s national dish, kimchi. It took three research institutes several years and millions of dollars to create a version of the fermented cabbage dish that was suitable for space travel.

In June 2008, Gregory Chamitoff brought bagels into space for the first time. He was on STS-124 for ISS Expedition 17, and brought with him 18 sesame seed Montreal-style bagels from his cousin’s bakery.

Designing food for consumption in space is difficult. Foods must meet a number of criteria to be considered fit for space; first, the food must be physiologically appropriate, specifically, it must be nutritious, easily digestible, and palatable. Second, the food must be engineered for consumption in a zero gravity environment. As such, the food should be light, well packaged, quick to serve, and easy to clean up (foods that tend to leave crumbs, for example, are ill-suited for space). Finally, foods must require a minimum of energy expenditure throughout their use, i.e., they should store well, open easily, and leave little waste behind.

Carbonated drinks have been tried in space, but are not favored due to changes in burping caused by microgravity.[13] Coca-Cola and Pepsi were first carried on STS-51-F in 1985. Coca-Cola has flown on subsequent missions in a specially-designed dispenser that utilizes BioServe Space Technologies hardware used for biochemical experiments. Space Station Mir carried cans of Pepsi in 1996.- (Wikepedia)

Enjoy the cooking styling of Sunni Boswell, the host of Asian Express.  Sunni will introduce you to various Asian cuisines and food at markets.

Enjoy the cooking styling of Sunni Boswell, the host of Asian Express.  Sunni will introduce you to various Asian cuisines and food at markets.

Find out more about Sunni as she shares her story of being a Korean adoptee and her passion for food at: http://www.multiculturalcooking.net/en2/about-us/86

Koreatown, or K-town as it is colloquially known, is a neighborhood in the New York City borough of Manhattan, that is generally bordered by 31st and 36th Streets and Fifth Avenue and Sixth Avenues. Its location in Midtown Manhattan leads it to be easily overshadowed by nearby destinations like the Empire State Building and Macy’s. The densest core of “K-town” is located on 32nd Street between Fifth Avenue and Broadway, and is officially named “Korea Way.” The Koreatown area of Manhattan is primarily a Korean business district, as few people actually live in the area. In fact, there are actually more Korean restaurants in Koreatown than Korean residents[1]. Most Korean residents of New York City live in the outer boroughs, especially in and around Flushing, Queens.

Once focused on fulfilling the needs of New York’s burgeoning Korean-American community (according to the U.S. Census, the city’s Korean-American population has grown from 69,718 in 1990 to 86,473 in 2000), it has seen an increase in non-Korean traffic in the last few years. -(Wikepedia)