Pikliz is a spicy slaw called pikliz which consists of cabbage, carrot, vinegar, scotch bonnet pepper, and spices.  It is a condiment. 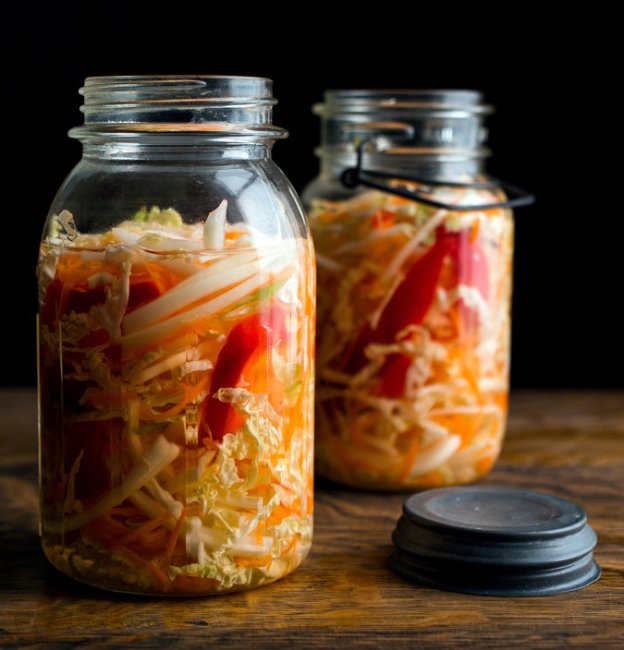 Floribbean cuisine is found in varying forms in Florida restaurants and in the homes of many Floridians throughout the state. The essence of what makes a particular dish “Floribbean” is similar to many other aspects of Floridian culture: that it is heavily influenced by visitors and immigrants from all over the world, but especially from the Caribbean (with notable influence from The Bahamas, Barbados, Jamaica, Trinidad and Tobago, and Haiti), Australia, and the American Deep South. In the case of the Southern Florida region in particular, a subdivision called Latino-Floribbean or Hispano-Floribbean cuisine also takes Latino cuisine traits from such countries as Mexico, Cuba, Colombia, Argentina, Brazil, and the Dominican Republic, adding further influences into the mix. To distinguish the Latino Caribbean style from the non-Latino Caribbean style, some employ the terms Afro-Floribbean cuisine and Indo-Floribbean cuisine, as the majority of the Caribbean islands are of either African or Indian heritage, which in turn were colonized by British, French, and Dutch settlers.-(Wikepedia) Visit MCCN’s Caribbean section: http://multiculturalcookingnetwork.com/regions/caribbean.html

The Arawak, Carib, and Taino Indians were the first inhabitants of the Caribbean islands.

Carib, Island Carib, or Kalinago people, after whom the Caribbean Sea was named, live in the Lesser Antilles islands. They are an Amerindian people whose origins lie in the southern West Indies and the northern coast of South America.

These first inhabitants occupied the present day islands of British Virgin Islands Cuba, Dominica, Grenada, Haiti, Trinidad, and Jamaica. Their foods consisted of vegetables and fruits such as papaw, yams, guavas, and cassava.  The Taino started the process of cooking meat and fish in large clay pots. The Arawaks are the first people known to make a grate of thin green wood strips on which they slowly cooked meat, allowing it to be enhanced by the flavor of the wood.  This grate was called a taken from this early Indian cooking method.The Carib Indians added more spice to their food with hot pepper sauces, and also added lemon and lime juice to their meat and fish recipes.

Check out Caribbean Recipes and history at :  http://multiculturalcookingnetwork.com/regions/caribbean.html

In response to the Haitian relief effort, Starbucks committed support and funding to the growing international relief effort. Participating Starbucks stores in the U.S. and Canada will enable customers to make monetary donations at store registers, with no purchase necessary, to benefit the American and Canadian Red Cross organizations for a limited time. The Starbucks Foundation will also donate $1 million (U.S.) from The Starbucks Foundation to the American Red Cross efforts to help Haiti.  Furthermore, Wyclef Jean is collaborating efforts with Starbucks.
Read More: http://www.qsrmagazine.com/articles/news/story.phtml?id=10043

Statement From Shakira about the Haitian devastation:

The destruction and loss of life in Haiti causes us all to take stock in what is really important. This small country has endured so much – more than its fair share of tragedy. I can’t imagine the devastation that has struck an already weakened infrastructure. Critical services needed for recovery, such as schools and hospitals, have been destroyed.

The people of Haiti need our help immediately. Money will be needed to provide urgent emergency relief and I urge everyone who can afford to help to either donate to UNICEF’s emergency relief fund at www.unicef.org or text the word YELE to 501501 on your U.S. cell phone (this will charge your phone $5 – it will go to Wyclef Jean’s foundation which is playing a major role in the relief effort. For more information, see www.yele.org).

We must all act. As a global community, we must be part of the recovery of Haiti and its people.

Our hearts go out to the Haitian Community, those with love ones and friends in Haiti.  We sincerely hope that nothing more serious occurs.  The earthquake could be felt in the Dominican Republic which shares the same island with Haiti but with no severity.-Crystal Johnson, MCCN Editor

This Statement from the Associated Press: http://news.yahoo.com/s/ap/cb_haiti_earthquake

The largest earthquake ever recorded in the area shook Haiti on Tuesday, collapsing a hospital where people screamed for help. Other buildings also were damaged and scientists said they expected “substantial damage and casualties.

Several reports are already in that Haitian Celebrity Wyclef Jean is already organizing relief efforts.   According Jam Showbiz Music, Former Fugees star Wyclef Jean is asking friends and fans to pray for the people of his native Haiti after the island was hit by three major earthquakes on Tuesday.

Joumou is traditionally consumed every New Years’ on January 1 as a historical tribute to Haiti’s independence in 1804 where newly freed slaves consumed pumpkin soup, a meal forbidden them by their French masters.  READ MORE.

Note that Squash or pumpkin is used in this recipe.

Clean the meat with hot water and lemon and set aside in a bowl. Add seasoning salt and set aside for 2 hrs. Boil meat in stockpot with 3 quarts of water until tender (about 1 ½- 2 hrs). Add more additional water if necessary and remaining ingredients except noodles. Cook for 20 minutes and add noodles.

There are more great recipes at Wikia.com

Please let us know if there something you think adds to this recipe.  If there is a running theme among the comments then we will make changes so it feels culturally authentic.

This submission was a suggestion by Nadine Eduoard.  She is of Haitian descent:

Soup Joumou is a traditional soup very popular and native to Haiti however other variations of it can be found throughout Latin America and the Caribbean. It is a vivid soup made from pumpkins. The squash slices are simmered in a saucepan along with pieces of beef and vegetables such as potato, parsley, carrots, and onions. The end result is pureed, usually in a food processor with a variable amount of water. The puree is returned to the saucepan where salt and seasoning along with garlic and other herbs and spices are added. Thin pasta such as vermicelli and macaroni is sometimes put in. A little milk and butter is mixed in as well. The condiments included give the soup its characteristic taste of being mildly spicy. It is always served hot and usually accompanied with rice and bread. Sliced bread is a frequent side-dish and that makes the soup a sort of dip as well. Soup Joumou is traditionally consumed every New Years’ on January 1 as a historical tribute to Haiti’s independence in 1804 where newly freed slaves consumed pumpkin soup, a meal forbidden them by their French masters. -(Wikepedia) 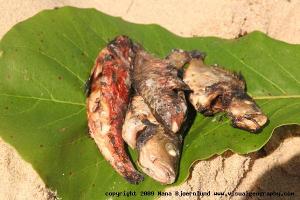 Looking for African influences in the Caribbean? Look no further than Haiti, where most of the population is of African descent. When the first Europeans came to settle in the land of the Arawak and Taino Indians, they brought oranges, limes, mangoes, rice, and sugar cane with them, but that’s not all they brought. They also brought African slaves and left them to work the sugar cane plantations.

“How did this come about?” you may ask. Well if you recall there was a man named Christopher Columbus who had a little something to do with the history of the Americas. Remember how Columbus sailed the ocean blue in 1492, well guess where else he landed? Quite the busy little beaver, the explorer discovered the already inhabited land and claimed it for Spain. Spain called it Santo Domingo, but Columbus named it La Isla Espanola (The Spanish Island later to be called Hispaniola).  By the year 1520, the native Indians were almost completely wiped out from the hard slave labor the Spanish imposed  upon them and the revolts of the people leading to executions by the Spaniards. Sadly the Taino’s have no tangible legacy in the form of an existing people in Haiti; therefore, Africans were shipped over to the island to work on the sugar cane plantations.

The Africans introduced okra, ackee (red and yellow fruit), pigeon peas, taro (edible root with a nutty flavor). By the year 1700, the French had taken control of Hispaniola and with the African slave labor still in place, they expanded their commerce to include coffee, cotton, and cocoa. Haiti went on to win their own independence in 1804 becoming the first African-American led republic in the New World.

Haiti, originally  named by Taino Indians for its high ground, shares  Hispaniola with their spanish-speaking neighbor, the Dominican Republic. Occupying just the western third part of the island, Haiti still remains highly influenced by the French in its language, culture, and food. French cheeses, breads, and desserts have been integrated into the Haitian lifestyle. Haiti’s cuisine is often considered French or Creole; however the Spanish, African, and French influence make for a smorgasbord of flavor and a truly historical and  multi-cultural experience.

The difference between Haitian and other Caribbean cuisine in a word: Peppery

Method of cooking: Often slow coked and wrapped in banana or plantains and leaves for several hours. An African method of cooking is still employed today, using coals and placing them in a hollowed-out area of the ground. The food is then placed atop the coals with the leaves covering it for ultimate slow cooking results.

Try this at home: In the mood for a Haitian creole specialty, click here for a recipe for Haitian griot (fried pork).

The food of Haiti is a great example of how a multitude of influences can combine to form an incredibly unified and coherent national cuisine.

It is not easy to imagine Haiti, a poor country, has so much to offer to the rest of the world when it comes to food. If you ever have the chance to taste and learn about Haitian food, however,  you would be able to appreciate the fine cuisine of the Haitians and fall in love with Haitian food  the same way many have so far.

Haitian cooking, whether French or Creole, ranks with the best in the Caribbean. The Haitians are best known for their Creole dishes, which mix French, African and traditional Haitian elements. 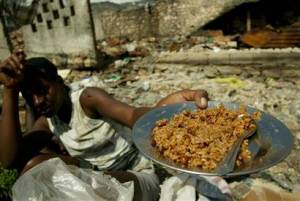 Haitian food is a mixture of African, American Indian, Arabic and French food. However, if you look at Creole cuisine in Louisiana and other parts of the South of the United States, you will see a large influence of Haitian cuisine. The Haitian diet is high in carbohydrates and fat. The main elements of the Haitian diet are corn, cassava, millet, rice and fruit. Tropical fruits such as pineapples, mangoes, oranges and grapefruit are plentiful