I was searching the web for 10 things every cook should know and what do you know, I found this article in the Boston Globe written by Matt Barber.  There is a short video that accompanies this article. -Crystal A. Johnson

NEWTON — All chefs have their own way of doing things: cutting an onion, roasting potatoes, making a basic sauce. And all chefs will tell you their way is the right way.

It’s no wonder then, with so many celebrity chefs, cookbooks, and food personalities on TV, that home cooks are confused about even the most basic of kitchen tasks.

Enter Michael Leviton, chef and owner of Lumiere in Newton and chef and partner of Area Four in Cambridge. Leviton is no stranger to basic cooking instruction: He teaches in Boston University’s culinary arts program, and has worked with young chefs right out of school, so he’s aware what novices know and don’t know. As recent college graduates strike out on their own, and newlyweds settle into their own places, the time to start building a lifetime repertoire of cooking skills is now.

“You master things by doing them over and over,” says Leviton. But cheat where it makes sense. “Look, I’ve got two kids. I don’t want to spend a lot of time in the kitchen when I’m at home.” Translation: Open a can of beans instead of soaking the dried variety, or buy biscuits instead of baking them. Leviton’s list of the 10 cooking essentials covers the basics for many meals.

Leviton demonstrates how to blanch geen beans and shock them in cold water.

PHOTO BY JOSH REYNOLDS FOR THE BOSTON GLOBE

This is a method of quickly cooking something in boiling water, then plunging it into ice water to stop the cooking process and lock in vibrant color. Leviton uses lots of salty water — his ratio is 1 cup salt to 1 gallon of water. “You want it to taste like the North Atlantic,” he says.

To blanch 1 pound of green beans to serve 4, bring a large pot of salted water to a boil. Have a large bowl of ice water nearby. Working in small batches, add beans to the rapidly boiling water and cook 3½ minutes, then use a slotted spoon to transfer them to the ice bath. Continue until all beans are cooked and cooled. Drain the beans, pat dry with paper towels, and saute briefly in a little butter or olive oil. 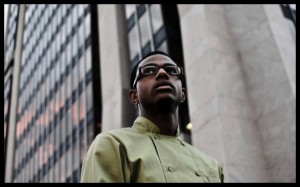 Chef Kwame Onwuachi was born in The Bronx, New York, and raised by his mother and older sister. Kwame’s first experience with catering was as his mother’s employee. He helped with everything, from cooking preparation to setting up events. Too young to attend all of the events, Chef Kwame was left at home where he would rummage through the kitchen and experiment with the various ingredients leftover from the catering gigs.

END_OF_DOCUMENT_TOKEN_TO_BE_REPLACED 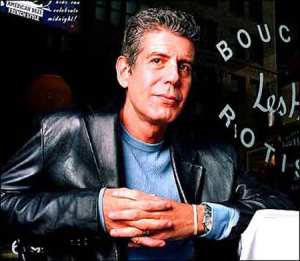 Anthony Bourdain was born in New York City. He is part French on his dad’s side to the degree that his grandfather moved to the states from France and some of us ladies agree that he is part hot. He attended The Englewood School for Boys in New Jersey, Vassar College (for two years) and is a graduate of The Culinary Institute of America. He began his career in the food industry over twenty years ago as a dishwasher, gradually working his way up through preparation, to line cook, to sous chef, and chef. He is the executive chef of Manhattan’s Brasserie Les Halles, which means, in his words, that he gets to “swan around the kitchen, taking credit for others’ work.”

It would take the Academy Award Winner and Comedian Mo’Nique to have a cookbook which includes in the title, “Skinny”,  affectionately about the people who are butt of her jokes.- MCCN Editor

From the cover of Essence to the stage at the Apollo, from reruns of her hit show The Parkers to her reality program Mo’Nique’s F.A.T. Chance, Mo’Nique exults in the joys of being a large woman. Here, she explores the great love of her life—food. But this isn’t food South Beach diet style. This is food with flavor, from chocolate and cream to sugar and butter and everything in between

In Skinny Cooks Can’t Be Trusted, Mo’Nique’s fondest food memories (like her mama’s stuffed fish that blew up in the oven but made it to the table anyway) are accompanied by cooking tips (when in doubt, taste it to make sure), food strategies (gather everything in one place so you don’t tire yourself out runnin’ around the kitchen), and “what to wear if you’re gonna go there” (because if done right, good food can lead to good lovin’!).

As one of Hollywood’s most celebrated events of the year, the Golden Globes are viewed by millions of people in over 150 countries worldwide. And we generally know what to expect by the time the 67th annual ceremony rolls around on Jan. 17— the bright lights, gilded statuettes and round tables filled with celebrities. The only thing you probably aren’t used to seeing is what the stars are eating for dinner.

The thought of some celebrities actually eating a real meal might surprise the fans who watch them on screen showcasing their well-trained physiques, but part of the time-honored traditions of this event—held every year at the Beverly Hilton in Beverly Hills—is the food.

This year is no different, albeit a little less flashy than you might expect. According to a recent Associated Press article, the menu includes herb-crusted mozzarella and grilled eggplant salad over vine ripe tomatoes, braised beef short ribs and artichoke sweet pepper ragout, as well as sautéed sea bass with truffle endive fritto.

Moet, still the official champagne brand of the Globes for the past 16 years, will be adding some social lubricant to the party with personal-sized bottles topped with mini-champagne flutes.

For dessert, a chocolate concoction, called “The Envelope Please,” includes a dark chocolate truffle filled with chocolate mousse and mandarin orange jelly sitting next to a chocolate envelope with a thin letter-sized piece of chocolate poking out of it.

With approximately 1300 guests in attendance, the challenge of serving and satisfying the diverse pallets of everyone from Zoe Saldana to Mickey Rourke has to be a challenge, And can you imagine having to plan a menu six months in advance just to make sure everything is perfect? Soon a team of over 100 chefs will be working from 6 a.m. to midnight the day of the awards all the way to the last minute before service ends.

But maybe it helps that the culinary staff will be using some familiar products. With an eye towards fresh, California cooking and the use of native products, the menu for the Globes this year is steeped in predictably tasty local flavors. Organized by Beverly Hilton executive chef Suki Sugiura (a four-time veteran of the Golden Globes) the menu is one that seems to symbolize Hollywood’s health-conscious culture, minus the dessert. And even though Hollywood surpassed $10 billion dollars in box office profit, it’s nice to see that the menu keeps things modest and light. 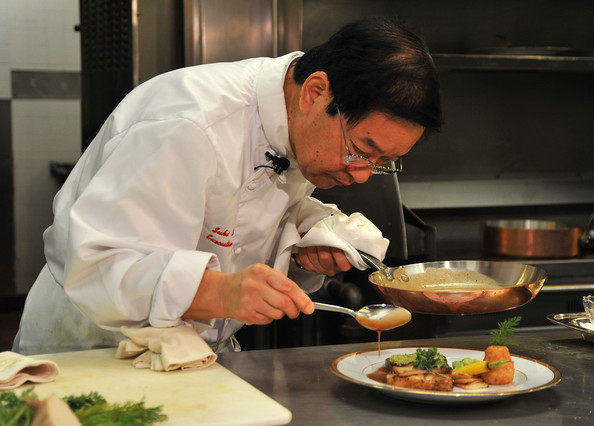 Chef Suki Sugiura is now in his fourth year of planning the menu and cooking for Golden Globe attendees.

Sunday, January 17, 2010 will mark the first time the Golden Globe awards ceremony will broadcast live all over the United States. Ricky Gervais will serve as host for the 67th incarnation of the awards show presented by the Hollywood Foreign Press Association.  First held in January 1944, the Golden Globes celebrate the best in film and television.  The first award ceremony was held at the 20th Century Fox Studios in Los Angeles and consisted of an informal and short awards presentation. The first awards recipients included: “The Song of Bernadette” (Best Picture), Jennifer Jones (Best Actress), and Paul Lukas (Best Actor).

Even though the ceremony has been held at various sites, including the Hollywood Roosevelt Hotel, the Beverly Hills Hilton hotel now serves as the official annual site of the ceremony.  As usual, Hollywood’s top players will come together in spectacular and fashionable harmony to celebrate and honor one another in a dinner party-type fashion. While sitting at conversation-inducing round tables, award attendees will partake in, both, fine wines and foods.

Suki Sugiura, executive chef at the Beverly Hilton Hotel, is in charge, for the fourth time, of feeding Hollywood’s elite.  Planning six months in advance, the professional chef works with a kitchen crew of 100 and works from 6am-12 midnight to ensure the tastiness of his work.

The official menu of the 2010 Golden Globes includes:

—White chocolate envelope filled with mousseline of lime and citrus cake alongside a chocolate dome sponge cake with Cointreau and mandarin orange center topped with chocolate glaze and gold leaf, garnished with raspberries.

For more information about the menu, see Golden Globes 2010 Menu: Feeding the Stars and for details about the 2010 Golden Globes please visit: http://www.goldenglobes.org/.

Article by Catrina A. Sally