When “New Girl” came on the scene.  Everyone was curious of about the new girl actress, Hannah Simone.  The sitcom

even decided to address the issue of her physical question mark of ethnicity.  The beautiful actress said in an interview with openchest.com:

“I’m a multi-ethnic person so I think most people are surprised by any part of the puzzle. My father is Indian, my mother is half German-Italian and half Greek-Cypriot. More people are surprised by where I grew up! Saudi Arabia, Cyprus, India, England and Canada isn’t a normal answer to that question. Being raised as someone who is multicultural and multi-ethnic has been the greatest gift to me.”

The German name has largely ousted the original English name marchpane with the same apparent derivation: “March bread.” Marzapane is

documented earlier in Italian than in any other language, and the sense “bread” for pan is Romance. The origin could be from the Latin term “martius panis”, which means bread of march. However, the ultimate etymology is unclear; for example, the Italian word derives from the Latin words “Massa” (itself from Greek Μάζα “Maza”) meaning pastry and “Panem” meaning bread, this can be particularly seen in the Provençal massapan, the Portuguese maçapão (where ‘ç’ is an alternative form for the phoneme ‘ss’) and old Spanish mazapan – the change from ‘ss’ to ‘z’ in Latin words was common in old Spanish and the ‘r’ appeared later.

Marzipan is a confection consisting primarily of sugar and almond meal. It derives its characteristic flavor from bitter almonds, which constitute up to 12% of the total almond content by weight. Some marzipan is also flavored with rosewater. Persipan is a similar, yet less expensive product, for which the almonds are replaced by apricot or peach kernels. In Goa (formerly Portuguese India) almonds are replaced by cashews. Many confectionery products sold as marzipan are made from less expensive materials, such as Soy paste and almond essence. German marzipan is made by grinding whole almonds with sugar and partially drying the paste, and French marzipan is made by combining ground almonds with sugar syrup. Spanish marzipan is made without bitter almonds.

There are proposed two lines for its origin; they are not necessarily contradictory but can be complementary, as there have always been Mediterranean trade and cooking influences. In both cases, there is a reason to believe that there is a clear Arabic influence for historical reasons (both regions were under Muslim control). Other sources establish the origin of marzipan in China, from where the recipe moved on to the Middle East and then to Europe through Al-Andalus.READ MORE

Ohio University student Sarah Williams says she was at a Halloween party last year when she snapped a picture of someone in black face. “It angers me and it’s unacceptable,” Williams said in an interview with Colorlines.com on Monday. So she and some fellow students decided to do something about it—and they’ve captured national attention in the process.  READ MORE

When considering what language to study. Think about this- That state with the highest percentage of people who speak another language than English at home is California, with 44%. Nearly two-thirds of people who speak a language other than English at home speak Spanish (37.6 million). The third most-spoken language is Chinese (2.9 million), followed by Tagalog (1.6 million)… http://www.buzzfeed.com/hunterschwarz/14-maps-that-show-what-languages-people-speak-in-the-us

Although, we have featured many stories on cast members of Glee we are not Gleeks.   Why have we done story after story on cast members of Glee over the years?  The cast is so multi-cultural in comparison to many other shows on television.  That is refreshing.  Having worked in the casting department of several shows, I am definitely sensitive to the subject.  As a writer, I do think that Glee fails miserably when it comes to writing for African Americans and  it has some casting issues too.  It is my Achilles heel, one for each foot  but I am not going there today.  Let’s stay positive and simply recognize the cast.  In today’s society more than ever in the United States, you can’t judge a book by its cover.

For instance to look at the very popular Darren Criss, you think “White Boy.”  Well, you would be partly right.  According to ethnicelebs.com, Criss is Irish, Filipino, Spanish, and Chinese.  In an interview you can watch him describe his love for Filipino food while visiting Manila.

Special Guest John Stamos  played a dentist on Glee.  If he was dentist then I don’t think I would have a problem with getting cleaning on a regular basis.  Stamos is one of Hollywood most widely known American Greeks to the point of landing Greek yogurt commercials.  However, the Greek is only one half Greek.  READ MORE

Naya Rivera plays Santana.  Naya recently told MTV that she is is half Puerto Rican, one quarter German, and one quarter African-American.   In her earlier days she played an African American on family matters.  On Glee, she is a proud Latina.  Her cultural ambiguity didn’t exactly help the actress when she was just starting out in the business. READ MORE

Lea Michelle plays Rachel Berry. Doesn’t she have the most beautiful chocolate brown hair.  Her mother is Italian American and Roman Catholic while her father is of Spanish Sephardic Jewish ancestry, and Lea was raised Catholic.

Jenna Noelle Ushkowitz plays Tina Cohen-Chang.  She is   is an Korean–American.   Tina was born in South Korea but she was adopted at the age of three months and raised in East Meadow, New York.

Review by blogcritics.org-Reading through the book Food Journeys of a Lifetime brought back memories of my time at home when I would meet with my friends 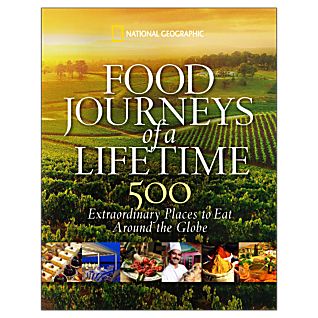 once a week, where we would cook an elaborate dinner featuring a different country, or region of the world. What was to become “around the world” night unfortunately ended when I moved to the other side of the state. I’ve always had a fascination and love for exotic and new tastes from different points around the globe.

Food Journeys of a Lifetime: 500 Extraordinary Places to Eat Around the Globe is a must have for the world traveler. Keith Bellows, the Editor-In-Chief of National Geographic Traveler’s magazine, says in his introduction, “a meal abroad is more than an intake of calories; it’s an exercise in cultural immersion.” The photography included within the pages is spectacular. Almost every page is filled with images from around the world that make your mouth water. The pictures aren’t always of mouth watering food, some are of places one can only dream about visiting: an underwater restaurant in the Maldives, Irish pubs, floating restaurants in Mauritius, and what can only be described as a “dining experience” in a Parisian train station.   READ MORE

Hugh Jackman and wife have been the parents of their adopted children since they were babies.   According an interview with New Idea, Jackman said:

Oscar  is a bit of everything – African-American, Caucasian, Hawaiian and Cherokee. We

specifically requested a bi-racial child because there was more of a need. People will wait 18 months to adopt a little blonde girl; meanwhile, bi-racial children are turned away. The same was true for Ava, she’s half Mexican, half German.

It is easy to find a variety of photos of pop and son, that kind of affection shown shot after shot can be hard to find.

See Great interview where Jackman talks about going out to a Knicks basketball game with his son.

Super Bowl ad parade — but according to a tipster to TMZ, the company that cast the ad sought a black actor for the role of a dealer by specifying someone “not too dark.” Moments ago, Acura issued an apology, saying it was unaware of the restriction.

TMZ says the call sheet for the ad was provided by another actor who was passed over for the role and angered by the casting company’s description. In the sheet, the firm says the role of a dealer who tells Seinfeld the first Acura NSX has already been sold should be “nice looking, friendly. Not too dark.”

The ad was created by an ad firm called “rp&,” a division of the RPA firm that creates ads for Acura’s parent Honda. (One might suggest updating their news page, which currently features several angry tweets about the racial choices of its Acura ad).

The real question: Why would the commercial specify a race for any of its minor characters? READ MORE

I watched the Oscars this year and it felt, well, familiar. Sure, familiar can be comforting, but familiar can also just be downright boring. Now don’t get me wrong; I have deep respect for Hollywood and all its players. I know that they are, for the most part, well-intentioned, sweet, progressive, liberally minded storytellers who have grand aspirations for the world. The problem is that while they believe in the concept of an all-inclusive, post-racial America, they don’t trust in it enough to bank on it. And now, they’re paying for it. (Read More at the Hollywood Reporter)