(Reuters) – A quarter of all Russian men die before they reach their mid-fifties and their passion for alcohol – particularly vodka – is largely to blame, according to research published on Friday.

A study of more than 150,000 people found extraordinarily high premature death rates among male Russians, some of whom reported drinking three or more bottles a week of the potent clear spirit.

Perhaps unsurprisingly, deaths among heavy drinkers were mainly due to alcohol poisoning, accidents, violence and suicide, as well as diseases such as throat and liver cancer, tuberculosis, pneumonia, pancreatitis and liver disease. READ MORE

The four main types of caviar are Beluga, Sterlet, Ossetra, and Sevruga. The rarest and costliest is from beluga sturgeon that swim in the Caspian Sea, which is bordered by Iran, Kazakhstan, Russia, Turkmenistan and Azerbaijan.

Caviar, according to the Food and Agriculture Organization, is a product made from salt-cured fish-eggs of the Acipenseridaefamily. The roe can be “fresh” (non-pasteurized) or pasteurized, with pasteurization reducing its culinary Traditionally the term caviar refers only to roe from wild sturgeon in the Caspian and Black Seas (Beluga, Ossetra and Sevruga caviars). Depending on the country, caviar may also be used to describe the roe of other fish such as salmon, steelhead trout, trout, lumpfish, whitefish,and other species of sturgeon.

Caviar spoons are traditionally made of inert materials, especially mother of pearl. There is a custom that caviar should not be served with a metal spoon, because metal may impart an undesirable flavor.[2] Some food experts point out that caviar is stored and sold in metal tins, and therefore any effect of metal on caviar flavor is a misconception;[3]however, others point out that silver is reactive, and may affect caviar flavor.

In the days of the Soviet Union, Christmas was not celebrated very much. New Year was the important time. With the fall of Communism, Christmas is openly celebrated – either on December 25th, or more often, on January 7th. The date is different because the Russian Orthodox church uses the old ‘Julian’ calendar for religious celebration days. The Orthodox Church also celebrates Advent. But it has fixed dates, starting on 28th November and going to the 6th January, so it’s 40 days long.

The official Christmas and New holidays in Russia lasts from 31st of December to the 10th of January. The Russian Christmas greeting is ‘S Rozhdestvom!’.

Some people fast (don’t eat anything) on Christmas Eve, until the first star has appeared in the sky. People then eat ‘sochivo’ (a dish made from wheat or rice with honey and fruit). The Russian word for Christmas Eve ‘sochelnik’, comes from the word ‘sochivo’. People then go to the midnight services.

In Russian literature, a cake named Наполеон (Napoleon) is first mentioned in the first half of the 19th century. The cake has enjoyed an especially great popularity since the centenary celebration of the Russian victory over Napoleon in the Patriotic War of 1812. During the celebrations in 1912, triangular-shape pastries were sold 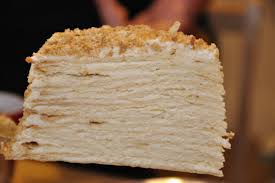 resembling the bicorne. The many layers of the cake should symbolize La Grande Armée. The top is covered by pastry crumbs which should symbolize the snow of Russia which helped the Russians defeat Napoleon. Later, the cake became a standard dessert in the Soviet cuisine. Nowadays, the Napoleon remains one of the most popular cakes in Russia and other post-Soviet countries. It typically has more layers than the French archetype, but the same height.

Icing: Mix sugar, eggs, flour and then pour over milk. Cook on low heat, stirring regularly, until dense. When icing cools down a little, add butter and vanilla.

Dough: cut margarine into small pieces and toss with flour until smooth. Mix egg, vinegar in 1 cup of water and add it to flour. Knead the dough until elastic and smooth. Divide the dough into 8 parts and put in the fridge for 40-60 minutes. Roll out every part very thin, put in a baking form, cut out remains, pierce with a fork and bake in a preheated oven until light golden. Bake the remains of dough until golden colour.
Spread the icing on every shortcake and on the top. Crumb the dough remains and sprinkle all the cake with them. Puy in a fridge at least for a couple of hours.

See Many recipes for Russian desserts and foods at:http://www.waytorussia.net/WhatIsRussia/RussianFood/Desserts.html

When: January 29-31, 2010 As a non-profit cultural organization, the Russian Center annually produces many cultural activities including operas, dance concerts, folk dance classes, social gatherings and lectures. The Russian Festival, held every February, is a three day showcase of food, art, music and dance, and attracts thousands ofÂ people from all over the San Francisco Bay Area and the world.For More Info visit: http://www.russiancentersf.com/

When you are talking Russian cuisine, the conversation must include soup. It is indeed a comfort food that has lasted the test of time. A very popular soup in Russia, although the Ukraine stakes its claim to the origins, is a beet root soup called borsch/borscht.

A truly hearty meal, its popularity is not contained just to the Ukraine and Russia. In fact, Poland, Lithuania, Romania – all of Eastern Europe prepares some version of borsch. Prepared either hot or cold, borsch has many different incarnations, but it is traditionally prepared from beets and cabbage (sometimes served with a dollop of sour cream).

Borsch was more of a common man’s meal, primarily eaten by the lower class. Those who were able to afford the extra expense used broths made from meat, fish, mushrooms, or smoked sausages, while the very poor solely used vegetables. The main ingredient (beets) were not very expensive.  All borsch recipes are slowly simmered and are served with garlic buns, pancakes, or some sort of black bread.

Russian Borsch is just one of the traditional Russian foods, Check out a recipe for Chocolate and Cherry Bread. Click Here.

From the Tretyakov Gallery in Moscow to the Winter Canal in St. Petersburg, there is so much to see and appreciate in Russia. This weekend the Holy Trinity Russian Orthodox Church is providing a taste of the country’s flavor with the Russian Festival. Now in its 36th year, the festival located in the Fells Point area of Baltimore, not only celebrates the rich history and culture of its parish, but  festival-goers are also invited to sample and enjoy lots of food,  plus live entertainment and souvenirs imported from Russia.

Now about that food…the delicacies range from desserts like Vishnovaya Babka  and Shokoladnaya (cherry bread and chocolate bread) to traditional Russian dishes like salad iz kapusty and blinchky (cabbage salad and stuffed crepes). Sound hearty enough? For the more dainty crowd, there is also an authentic Russian Tea Room with an antique samovar (metal urn for making tea).

The three-day festival ends on Sunday, October 18th with a power-packed itinerary including the Lyman Ukrainian Dance Group, live music from Balkanto, and The Beltway Balalaikas Ensemble. For more information about the Russian Festival go to the following website: Russian Festival.