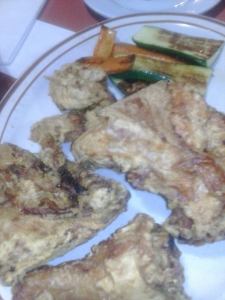 Broasting is a method of cooking chicken and other foods using a pressure fryer and condiments. The technique was invented by L.A.M. Phelan in the early 1950s and is marketed by theBroaster Company of Beloit, Wisconsin, which Phelan founded.

Broasting equipment and ingredients are marketed only to food service and institutional customers, including supermarkets and fast food restaurants. They are not available to the general public. The method essentially combines pressure cooking with deep frying chicken that has been marinated and breaded. The company licenses the “broasted” trademark to more than 5,510 purchasers of its equipment who follow its specifications and recipes and undertake a periodic certification process. The arrangement is not a traditional franchise in that the licensee does not owe ongoing royalty payments.

Broasted chicken remains highly popular in countries such as Saudi Arabia and Pakistan. Many restaurants and fast-food chains in these countries have the word “broast” in their names. One such restaurant of global renown is Al Baik exclusively in Western Saudi Arabia.