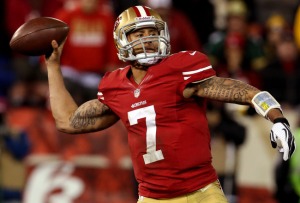 What comes with price of success tends to be more invasive questions than you’ve ever experience in your life.  When you “mixed”, often the question can be annoying.  The latest multi-cultural celeb experiencing this is San Francisco 49er’s  Colin Kaepernick.  He  is bi-racial African American and Caucasian but he didn’t grow up with his birth parents.

Kaepernick was adopted at birth by Rick and Teresa Kaepernick. His birth mother was 19 when he was born and wanted to give him a better life, according to his family. His birth father left the picture as soon as he found out a baby was on the way, the family said.

Rick and Teresa had two children of their own, but lost two babies shortly after birth because of heart defects. Never mind that Colin was black and they were white. They just wanted another baby. So they took him in, remaining open and honest about his adoption. Though they often get puzzled stares and quizzical looks, nobody in the family thinks much about his place in it.  READ MORE