When watching your favorite televisions shows you are invited.  Recollect great moments, show history and facts.

Al’s Diner ( The Series-Happy Days)-The Milky Way Drive-In, located on Port Washington Road in the North Shore suburb of Glendale, now Kopps, was the inspiration for the original Arnold’s Drive-In; it has since been demolished. The exterior of Arnold’s was a “dressed” area on the Paramount Studios lot, that has since been demolished, very close to Stage 19, where the rest of the show’s sets were located. Al’s Diner of Happy Days was a Milwaukee Drive In Restaurant of the 50’s.– Show Featured- Henry Winkler, Ron Howard, and Scott Baio.

Mel’s Diner (The Series-Alice)- A greasy-spoon diner in Phoenix, Arizona is the setting for this long-running series. The title character, Alice Hyatt, is an aspiring singer who arrives in Phoenix with her teenaged son, Tommy, after the death of her truck-driver husband. Alice is hired at a diner owned by Mel Sharples, a gravel-voiced, male-chauvinist fry cook.  The most famous quote TV line came from the character, Flo.  Her famous line, “Kiss my Grits.”

Cheers(The Series-Cheers) Part of the allure came from the song boasting of a place where everybody knows your name and they are always glad you came. Created stars- Ted Danson, Woody Harrelson, Kirstie Alley and Shelly Long.

Breadstix( Glee) The high school kids favorite place to eat up and chat is the all you can eat soup and salad family style restaurant. 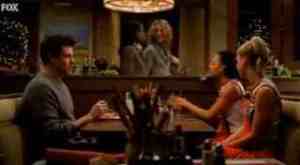 Special mention for The mysterious restaurant of the “Soup Natzi” of Seinfeld.