MCCN’s Erika Holmes shared with us as a  Puerto Rican you can expect to find Arroz Con Dulce on the Christmas Table Spread. We found this recipe on the great web site El Boricua, which should be on list for all things Puerto Rican.

Wash rice and soak in water to cover, generously, for 2 hours. The rice will soak up the water so use plenty.About twenty minutes before rice is finished soaking combine the 4½ cups of coconut milk, salt, cinnamon, ginger, cloves and nutmeg in a medium size caldero.

This is served cold. 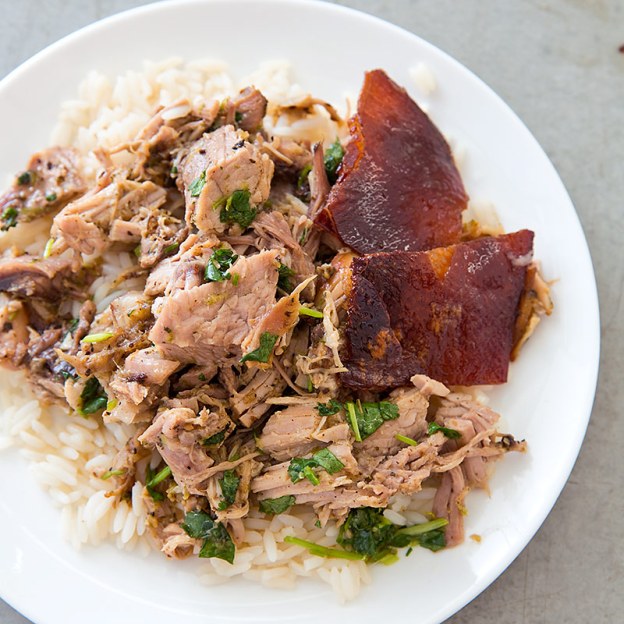 (Spain), Africa and the Amerindian Taínos. In the latter part of the 19th century the cuisine of Puerto Rico was greatly influenced by the United States in the ingredients used in its preparation. Puerto Rican cuisine has transcended the boundaries of the island and can be found in several countries outside the archipelago.- MCCN found the following recipe from the Casual Kitchen blog.  We suggest taking a peek at the beautiful photos they have to accompany this recipe and the tips. (Click Here)

Ingredients:
A 4lb to 4.5lb pork shoulder, with skin on
Wet Spice Rub

Directions:
Up to three days ahead of the date you serve the roast, do steps 1 and 2. On the day you cook the roast you’ll do steps 3 through 5.

1) To make the wet spice rub, grind the garlic and salt into a paste using a mortar and pestle (you can save yourself buying the extra kitchen items; we used the back of a heavy spoon in a smallish Tupperware bowl and it worked just fine). Add pepper and oregano, grinding and mashing to incorporate the spices into the paste. Stir in the olive oil and vinegar, mix well.
2) Once you’ve made the rub, use a very sharp paring knife to cut several slits in the pork shoulder, about 1 1/2 inches apart. Make the cuts as deep as you can, through the skin and well into the shoulder meat. Wiggle a finger into the slits to widen them, and then fill each cut with wet rub, using a small spoon. Do this on all sides of the pork shoulder. If you have any leftover wet rub, just smear it all over the outside of the roast. Refrigerate the roast, covered, for at least one full day (but preferably two to three days) before cooking.

To cook the roast:
3) Preheat the oven to 450F.
4) Set the roast, skin side up, on a rack in a roasting pan. Roast for 1 hour, turn the heat down to 400F, and then cook the roast for another one and a half hours, or until a meat thermometer reads the meat in the center of the roast at 160F.
5) Let the roast “rest” for 15-20 minutes after you’ve taken it out of the oven. Then, pull off the skin (it should come off fairly easily in big pieces) and then carve the meat parallel to the bone with a large and very sharp knife. Pile the meat on a platter and enjoy!