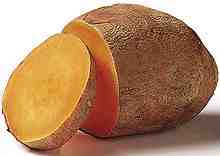 The Sweet Potato is a well loved in many cultures. Sweet potatoes very early became popular in the islands of the Pacific Ocean, spreading from Polynesia to Japan and the Philippines. One reason is that they were a reliable crop in cases of crop failure of other staple foods due to typhoon flooding. They are featured in many favorite dishes in Japan, Taiwan, the Philippines, and other island nations. Indonesia, Vietnam, India, and some other Asian countries are also large sweet potato growers. Uganda (the third largest grower after Indonesia), Rwanda, and some other African countries also grow a large crop which is an important part of their peoples’ diets. North and South America, the original home of the sweet potato, together grow less than three percent of the world’s supply

In some fashion or another it makes it way on holiday dinner tables.  Here are five recipes that will have your guests begging for more:

Bubor Cha Cha is a porridge dessert with pieces of yam or colored dough in a sweetened broth. Sometimes it’s made with tapioca which is how I like it. I also like it creamy and with lots of coconut milk!