It looks like Charlie Sheen madness has forced me to write the piece sooner about the great hot dog stand called “The Infield” all because he snapped a shot of hot dog then twittered it.  I was alway curious about this place but about a month ago I finally stopped by to try the hot dogs.  Going to The Infield is an experience with wooden bleachers and actual seats from various MLB stadiums.  It was easy for me to fall in love with place having worked for the Baltimore Orioles organization for or Three years from the ticket booth to the video production department.   Hold on, I never surrender my Yankee loyalty being a New Yorker it is in the blood to be born Yank.  Needless to say, I have spent  a good deal of time in the baseball stadium and this spot gets the feel right.  The speakers blast major league games or old games.  It would be awesome if the sold cracker jacks.   Real film buffs may remember that Charlie Sheen probably takes his baseball hot dogs seriously after starring in the 1989 film Major League. 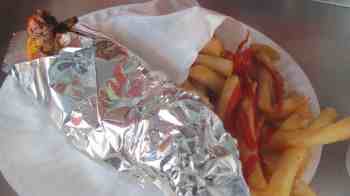 The Infield has a pretty innovative menu with items such as the West Virginia Hot Dog, the Kick